In a tip-of-the-hat tribute to the original Irish Music Club of Chicago (see bottom of page), I reckoned it would be nice to at least resurrect the "spirit" of the group, and what a better way than to help promote music here in Chicago and beyond. More information coming in the near future.... 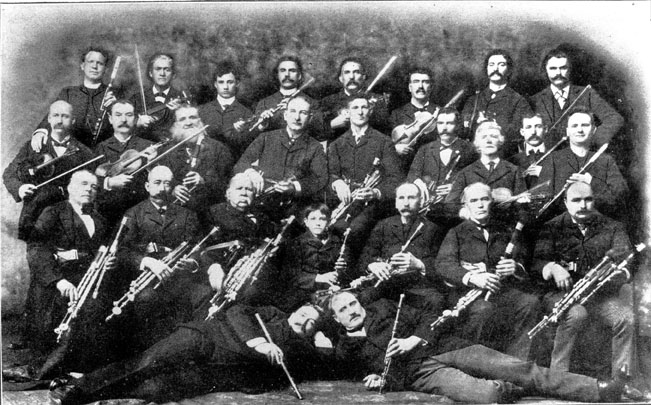 The Irish Music Club of Chicago fl. c. 1901–09, a semi-formal association of Irish traditional musicians which included many source-players for The Dance Music of Ireland. 1001 Gems…, the bible of Irish dance tunes compiled and published by Francis O’Neill in Chicago one hundred years ago this year.

The Club is the earliest known organisation of Irish traditional musicians in North America. Growing out of informal house sessions in Chicago, it provided a meeting place for (male) non-professional musicians from all regions of Ireland and their American-born children. They came together monthly in a rented hall and also organised public concerts, dances and picnics. After prospering for some years, the Club eventually broke up after bitter personal rivalries arose between some members. Francis O’Neill (1848–1936), president of the Club and Chief of Police in Chicago from 1901 to 1905, is fourth from left, back row, with his son Rogers. With the assistance of James O’Neill and Selina O’Neill (no relations), Francis O’Neill published seminal and still-influential collections and studies of Irish traditional music in Chicago from 1903 to 1924.