Met up with long-time friend Mike Courtney last night in the city. Turns out Mike had an extra ticket to see the Smithereens at the Beverly Arts Center which he kindly talked me into going. A double first time for me. The center itself is one of them modern glass and brick jobeen's with multi-wings over two floors. The 400 seat theater is very comfortable with great sightlines from any point. Acoustically I think it is just a bit too boxy for loud rock music but it would be a grand room for more acoustic based music. Thanks to Mike we had fifth row seats so we got the full blast from the Marshall & Ampeg stacks and the full Pearl drum kit along with the eight dual onstage monitors. (We were too close to the stage to tell, but I imagine it was as loud on stage as it was in the house if not louder...) 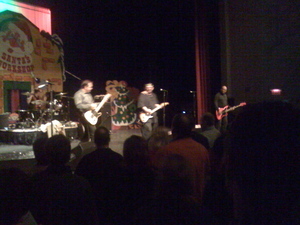 Anyway, for the first time seeing/hearing the Smithereen's live, I was quite impressed. It was good old fashioned solid straight forward rock without any of the modern pretenses. And they are definitely a man band -- not a boy band ;-) Nice and steady rhythms laid down by the brilliant drummer Dennis Diken -- for any of you inspiring rock drummers out there he'd be a great role model for you. They rolled out their hits including their #1 Billboard single "Only a Memory" and capped the night with "A Girl Like You." They also threw in a couple of original christmas songs, and for fun, Elvis' version of "Blue Christmas," and Chuck Berry's version of "Run Rudolph Run." Pat DiNizio is an affable front man and an earnest singer who would make a great next door neighbor. Definitely would see them again -- in a larger rock venue or a small rock club. Thanks Courts!